skip to main | skip to sidebar

Issa Freij has always been a part of Anadiel and Al Ma’mal’s story. He has filmed and photographed exhibitions, people and events prolifically and continues to do so. In this Jerusalem Show he videoed most of the performances and also interviewed some of the artists and community centres. His photograph and video archive is probably so huge by now that it would take several years to get an idea of what it contains. It is not just a record of events but a consistent and ongoing record of the people, the places and the culture.

One of his projects in Al Ma'mal is a sequence of images taken during the last 30 years which have been re-arranged to create a new timeline. Moving from left to right, the timeline is reversed, and yet still seems just as familiar and logical in its new arrangement. 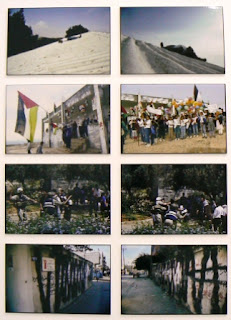 His other work at Al Ma’mal also merges the past and the present but all within a single scene he captured at a demonstration in Jerusalem. This complex image has three layers:


One layer depicts or represents the marching populace, angry, frustrated, tired yet resilient. The second layer depicts Jerusalem’s iconic monument, the Dome of the Rock, printed on a stretched banner carried by the marching crowd, and right across it a screaming slogan in the colour of the Hizbullah flag imploring Arabs for help - quite painful don't you agree? The third layer is a number of smaller images adorning the bottom of the banner carried by the crowd and resembling medals of honour for "typical" calamities that have plagued and burdened our sorry history (Mohammad al Durra and other martyrs). All of this is portrayed against a very normal background of a cloudy day, an evergreen and a Marlboro sign, which is telling us in a way: c'est la vie and too bad you happen to be who you are, on the wrong side of the fence so to speak. And the picture with all its elements represents life, a mirror of our culture and people, and a tool of expression that rises above all prejudices, pedantry and parochialism. (Text from Jerusalem Show Catalogue) 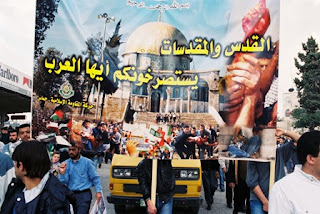 It seems appropriate to end on this image because it was the original choice for this year's Jerusalem Show poster. Concerns about the risks of it being perceived as too provocative, eventually gave way to another poster design but not before an intense email exchange among the Al Ma'mal board. The final poster for the Jerusalem Show ingeniously referenced the original choice by using cut-up extracts of text from these email exchanges.
Posted by Writer-in-Residence at 11:13 AM

If you do not use any accounts listed below, please select 'Name/URL' to comment. You can then type your name and leave URL blank (unless you want to link your own website). Thank you.

The Al-Ma'mal Foundation for Contemporary Art was founded in Jerusalem in 1998. This project will chart the history of the foundation and its pioneering workshop programmes, international artist residencies, exhibitions and the Contemporary Art Museum - Palestine (CAMP).

The most recent post always appears at the top of the blog. To start at the beginning, please click on the archive for April and read blog posts from the bottom of the page up.